Which Type of Salt Do I Need

Water Softener Salt is made in three forms, Tablet Salt, Granular Salt, and Block Salt. These are all made from ordinary common salt – Sodium Chloride – the same type of salt you would sprinkle on your chips! The main difference is the way it is compacted into different grades.

Like most U.K. distributors, Salt Store sell all three grades of salt, in a range of convenient and cost effective quantities for delivery throughout East Anglia. 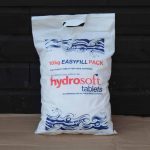 Tablet Salt (sometimes known as Pellet Salt) is the most common salt that is being used in most domestic, and many commercial water softeners. Salt Tablets are either pillow shaped, or a round tablet roughly the size of a bottle top.

Tablet Salt is typically packed in a 25kg bag, 10kg bags are available from some manufacturers but at a higher cost. Most of the single cylinder softeners use salt tablets, popular brands include Hydrosoft, Aquasol, Care Cubes, Broste Pioneer, Supreme and many others but they all function exactly the same in your softener. 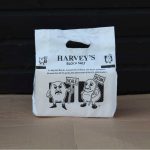 Block Salt is the newest development in water softening salt. Designed to be very dense to get the maximum salt autonomy period (the length of time between refills) for the latest generation of small twin cylinder non electric block salt water softeners.

Salt blocks come in packs of two, each weighing 4kg, The pack has a built-in handle making lifting and handling a very easy option and particularly suitable for softener owners who may be older or with mobility or lifting difficulties. Although block salt is more expensive on a weight for weight basis, it’s used in softeners that are usually very efficient, so in many cases the total cost is similar overall.The main brands of block salt are Harveys Block Salt, Kinetico Block Salt, Aquasol and Culligan Block Salt. They are all universally suitable for the popular brands of block salt water softener including Kinetico, Mini Max, crown, Twin-tec, Monarch and many others. 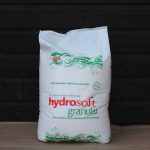 Other popular makes include Hydrosoft granules, Granulite and Supreme.

25kg bags are pretty standard for salt granules. 10kg bags are available, but at a higher cost.